A Georgian ode to Austria

In June last year I wrote a blog entitled “Living in Limbo–A Streetside Portait” about a man who stands outside the local supermarket and sells the Augustin newspaper. He’s a refugee from Georgia and used to teach philology back home. I cannot communicate well enough with him to know why he had to leave his home. Perhaps he’s a political refugee and is reluctant to talk about it. Today he handed me a story, photocopied from an old edition of the Augustin. Since his German is very halting, I presume someone translated it for him. Whatever the case, the writer comes across as intelligent, well-read and sensitive, and the story deserves a wider audience. Hence I’ve translated it into English and posted it here. I hope you enjoy his story. I’ll simply call the writer Wassili. 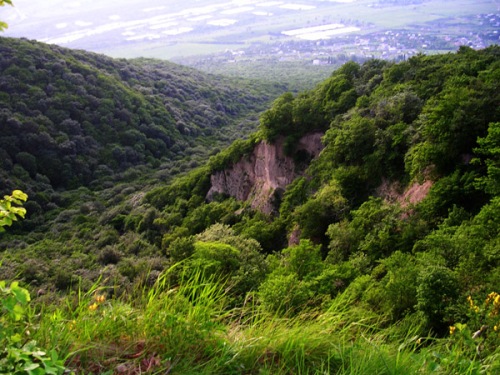 The Man and the Mountain

I’m no longer a stranger here now. I feel I’m in familiar surroundings. I have many acquaintances who call me by name when they talk to me, which pleases me no end. No one knew me in those days, when an elderly man, Herr F., invited me to his villa. He was eighty years old, but still active and full of joie de vivre. His energy would have put many a younger man to shame. His villa was near Neustadt. He called the Augustin office one day to ask for ‘permission’ to take me to Neustadt. He arrived at the Augustin office in his car to pick me up at the appointed time. This was a great honour to me; such a great honour that it was embarrassing.

I remember another occasion when I felt such embarrassment; it was a very cold day. I had no gloves and I was selling newspapers. I noticed someone staring, and then approach me holding out a pair of gloves, obviously intending to give them to me. I refused, pretending I was not cold, but that was wrong. It’s normal for Austrians to look at strangers, but I only understood much later that it’s even more embarrassing to refuse warmth and gestures of goodwill.

Herr F and I drove in his car. It was an old Ford, but very well maintained. He was in high spirits. We joked and laughed a lot. He showed me his villa. Then he took me out to lunch at a restaurant in the mountains. We ate well and drank a little. Herr F was the first person in Austria who reminded me of the words of the 12th century Georgian poet Schota Rustaweli who said: Never forget the duty of friendship to a friend who shows you his heart, for all paths are open to him.

Several days passed before Herr F. came to see me again. “Wasil,” he said, laughing. “You’re Stalin. And I’m Hitler.”
“No Herr F. That’s impossible. The two of them didn’t like each other. They were enemies. We, however, like and respect each other.” Herr F. smilingly agreed. He knew who Stalin was. I’d spoken about him that day at lunch in the mountains. Stalin was Georgian, from Gori. This place is known for its delicious apples and its Stalin Museum. Many foreigners think Stalin was Russian and when they learn he was Georgian, they come to visit the museum.

I haven’t seen Herr F. for several months now. I’m now selling the Augustin at another location. I have neither his telephone number nor his address in Vienna. What do I know about this man who gave me, a stranger arrived in Vienna, such a memorable day? Who knows if he is in trouble, and if so, how I can help him? Who knows where he is now? Perhaps he’s busy and no longer remembers this simple newspaper seller.

There are perhaps many people who think like me. Perhaps the mountain also thinks so; the mountain that rises five hundred meters in front of me, and spends its time thinking. When no one comes to me to buy a newspaper for a long time, the mountain and I look at each other. I think of the time I worked in a school, with a book in one hand, und taught children Georgian language and literature. Now I’m learning to live, or rather, learning how not to be a stranger in a land where I must live.

Sometimes in autumn the mountain is covered in fog– and it seems to be thinking. Just as I do. A big mountain can think more than the small one can. People are like that. The more they think, the more the fog bothers them. I’m talking about the mountain that stands before me. There are vineyards on its flanks, but I see no one there. I wonder how anyone can produce wine on such steep slopes. Georgia too is a land of mountainous vineyards. Grapes grow there too; grapes that are nurtured like children.

In the country where I was born and grew up, one can see mountains, precursors of the Caucasus. I visited these mountains often in my childhood. I went alone, sat down somewhere under a bush, and looked down fondly at my village, loving every single settlement as far as I could see. You small Austrian alpine mountain, I think. It’s your fault that I’m homesick at the sight of you. I love you too. Even though I’ve not known you so well, I love you from a distance. There will come a time when I’m closer to you. For then, if you allow me, I’ll look on your fields and meadows from above, just as I did as a child, silently and wordlessly turning to the land I used to say: I love you, Georgia! With the greatest respect then, I would then humbly say: I love you, Austria.

See this author’s page at Amazon.com to read more of his work