Oil Companies Step into the Sunlight

It has been fashionable in green circles to portray oil companies as a major part of the multinational axis of evil that feeds global warming, contributing to the destructive exploitation of our planet, driven by their greed for profit. This blogger has been of the opinion that, ironically, oil companies are among the best equipped to handle the technological challenges that face large scale deployment of renewable energy technology. Compare the technical challenges of setting up large offshore wind farms or drilling from a deep-sea oil platform; installing ocean energy conversion devices, wave generation or tidal flow streams in rough coastal waters; think of the setting up of large scale solar thermal plants or solar PV farms under Saharan conditions. All of these ventures require a high degree of engineering skills and huge amounts of capital; all of which are in plentiful supply at oil companies.

There are visionary leaders among the oil companies who see that the transition to lower carbon fuels was inevitable. BP for one, under the leadership of John Browne, briefly tried to recast itself in the late 1990s as a company “Beyond Petroleum,” but the initiative was defeated by market forces, the world’s insatiable demand for more and bigger cars, and the success of the oil companies themselves in finding ever more efficient ways of secondary and tertiary recovery of oil from wells that had long been considered pumped dry. And now another development to slow the adoption of renewables, the plentiful availability of natural gas through fracking. In addition to being awash in natural gas, the US is set to overtake Saudi Arabia as the world’s second largest oil producer, behind Russia.

Despite all these seeming setbacks to renewables, it is increasingly accepted by research and advisory groups within the oil companies themselves that the large-scale transition to renewable sources of energy is inevitable. BP notes in its 2012 annual report that oil demand has fallen in six of the last seven years, as has coal. Here is a link to several scenario studies by Shell that postulate what the transition could look like. The energy output from renewables worldwide today has reached the level forecast for the year 2025 by the International Energy Agency in 2000,  I would similarly argue that Shell’s renewables forecast for the year 2070 will probably be achieved by the year 2050, if not earlier. Predicting future developments is always uncertain, of course, but it is the strength of our collective beliefs and actions today that will determine our tomorrows.

Lamma Island: View from the Top

We feel very privileged to live on Lamma Island, that is home to a relatively quiet rural community, just 25 minutes ferry ride away from the high rises, high life, high fashion and high prices on Hong Kong Island, adjoining Kowloon and the other mainland areas of the Special Administrative Region, as it is called ever since the transfer of sovereignty (referred to as “the Handover” by the English language international press, and “the Return” in mainland China) in 1997.

Our coming here adds to an ongoing problem for the local population, as new immigrants drive up land and housing prices; the age-old conundrum in every country that seeks added income through increased tourism or external investment. In this regard, Austria comes to mind as an exceptional country, where tourism is a large contributor to the economy that manages to raise the standard of living of the local population without pricing them out of the housing market. Opinions on this from some of my economist friends welcomed here!

For those who despair at the daily news reports of record-breaking summer temperatures and the inexorable onset of global warming, take heed and take hope from the following numbers. The total installed generating capacity of photovoltaic (PV) solar worldwide in 2012 equalled 100 GW, or roughly the equivalent of 100 nuclear power plants. Solar PV is a silent, reliable technology (as long as the sun shines, but see Intermittency below for more on that) with no moving parts and a life expectancy of 20 – 40 years. This currently installed generating capacity uses PV cells that convert sunlight to electricity at efficiencies ranging from 9 to 14 percent, around 10 percent on average.

But there are a number of new generation PV cells in the works in dozens of countries around the world that have achieved efficiencies of 40% under laboratory conditions. These are mostly multi-junction PV cells coupled with a layer of light-focussing elements. These cells are currently too expensive for everyday use but have proved their worth in satellites and at remote research locations. As mass production techniques for each of these new technologies evolve, the price of such systems will come down within a decade to the affordability range of the current crop of monocrystalline cells that are the most commonly used worldwide.

Mass production in China has reduced the prices of monocrystalline cells so much in the past few years that they are now being used in rural areas in India. For a more detailed report by someone active in rural electrification efforts, see the link below.

Intermittency: Solar power is great as long as the sun shines, but what about after dark? Well, there’s wind, for one, but that is intermittent too. The evolving answer to that is storage technology (see my blog of 22nd June: Renewables – 13 next-generation battery designs). Link below

The bottom line is: systems are not perfect, and if anyone wishes to poke holes in an argument, they can and will. So in the end, choice of energy systems comes down to attitudes, opinions and habit. This fact lies at the heart of the renewable energy debate. Proponents of business-as-usual, nested comfortably as they are in a carbon-based economy that has reached a high degree of organizational efficiency over a century, see no need to change, and dismiss all thought of powering the world with renewables instead of coal, oil and gas as it is now.  As Carl Jung pointed out nearly a century ago: Attitudes are more important than Facts, so a proponent of nuclear energy is likely to insist on the relative safety of nuclear technology (an argument that is statistically correct) until the day his own family is forced to shift from their home forever because of uncontrolled radiation release.

For anyone looking for more details on the PV technologies mentioned above, I can recommend the blog postings of the indefatigable Dave Elliott at http://blog.environmentalresearchweb.org/2013/08/17/solar-cells-1/

Hong Kong is rightly known to be a shopper’s paradise. Even to one indifferent to the lure of possessions like yours truly, it is hard not to admire the vibrant energy and hard work that lie behind the glittering facades of designer storefronts, name brand stores and all the shiny temples of consumerism on display. Walking down a Kowloon street at 10 o’clock one night in the first week of our stay, we were astounded to see well-dressed shoppers toting designer bags queueing up to get into the flagship Gucci store; a store that easily surpasses Vienna, London or New York in both size and glitz.

Here is a short extract from the blurb for the Ocean Centre shopping mall:

After listing several dozen of the most famous among the 700 shops and 50 restaurants in the complex, it then goes on to say:

Shoppers venturing into Harbour City are advised to obtain a shop directory/floor plan on arrival as whilst the layout of this mall appears simple the numbering of floor levels can be particularly confusing when moving between different zones. A warning I would advise you to take seriously if you don’t want to wander for hours! 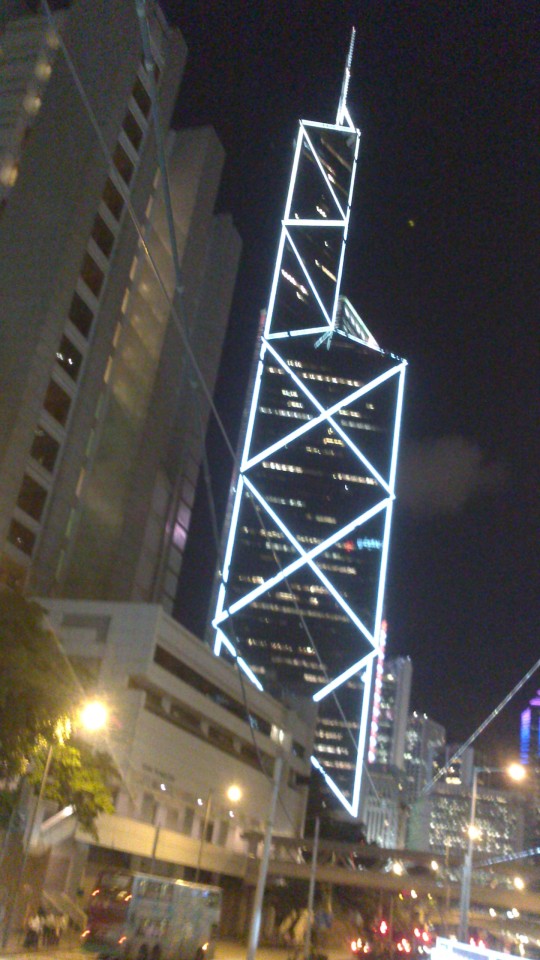 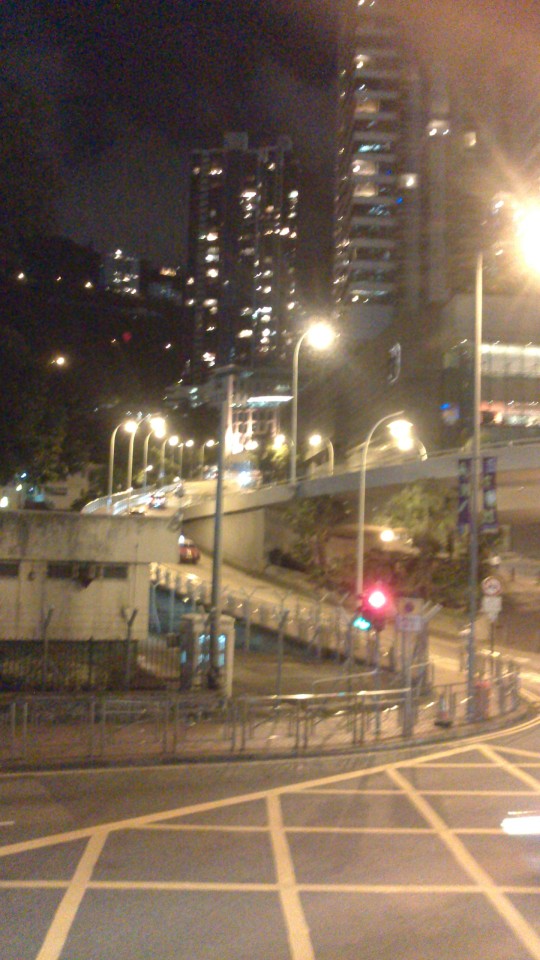 The feng-shuied elegance of the city’s skyscrapers and smooth-flowing traffic on multi-layered roadways are both marvels of engineering and organisation. And then, on a crowded street near Central, the sight that epitomised the depth of this city’s mercantile impulse; a ten-storied building in this tropical city apparently dedicated entirely to Siberian Fur.

Mr. Hadrian and his wonderful Wall 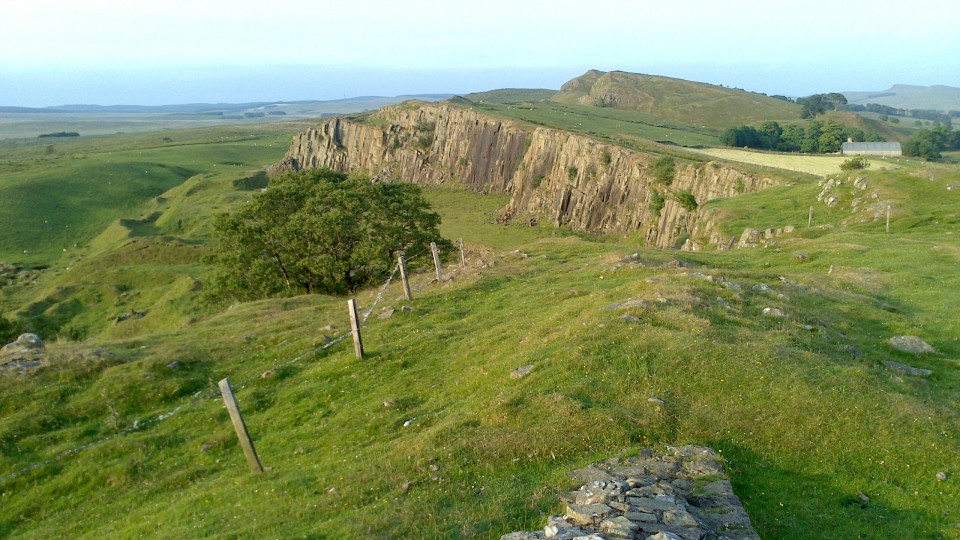 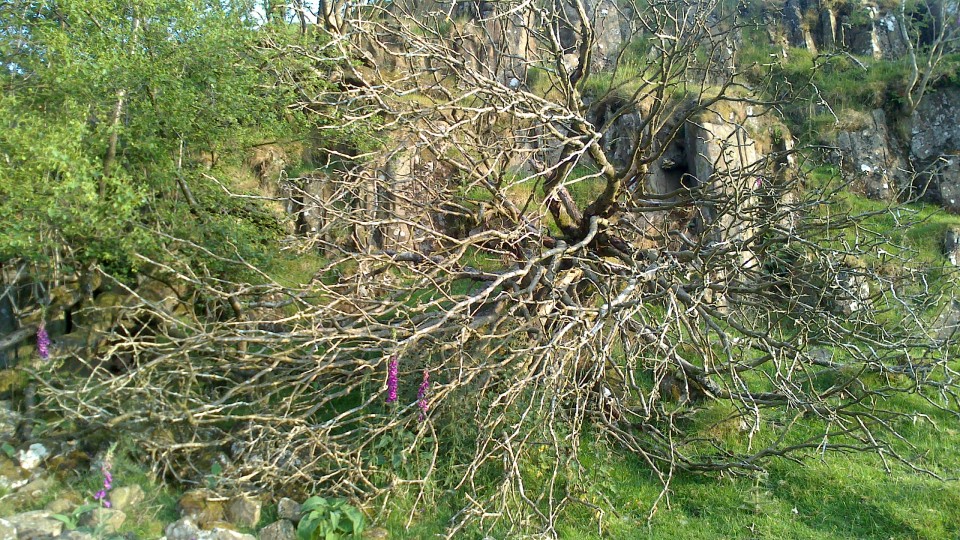 Driving north from Birmingham on the highway that is variously called the M1, the M18 and the A1, one comes across traces the Romans left of their long stays in Britain two thousand years ago. Around 120 AD Mr. Hadrian, properly known as Publius Aelius Traianus Hadrianus Augustus, who was an avid tourist and visited almost every province of his vast empire during his reign, came to the far north. He decided to prevent the savage Scots (who are now trying to peacefully disengage from, and stay out of, Britain) from entering his realm by building a high wall to keep them out. How times change!

Successful or not, today the remnants of Hadrian’s wall run through a beautiful piece of gently undulating countryside that is well worth a few days exploration. From Corbridge, one drives along enchanting winding lanes to Vindolanda, where there is an exceptionally fine Roman Army Museum. There are several archaeological excavation sites in the surrounding countryside that regularly unearth details of everyday life in these Roman towns and garrisons. 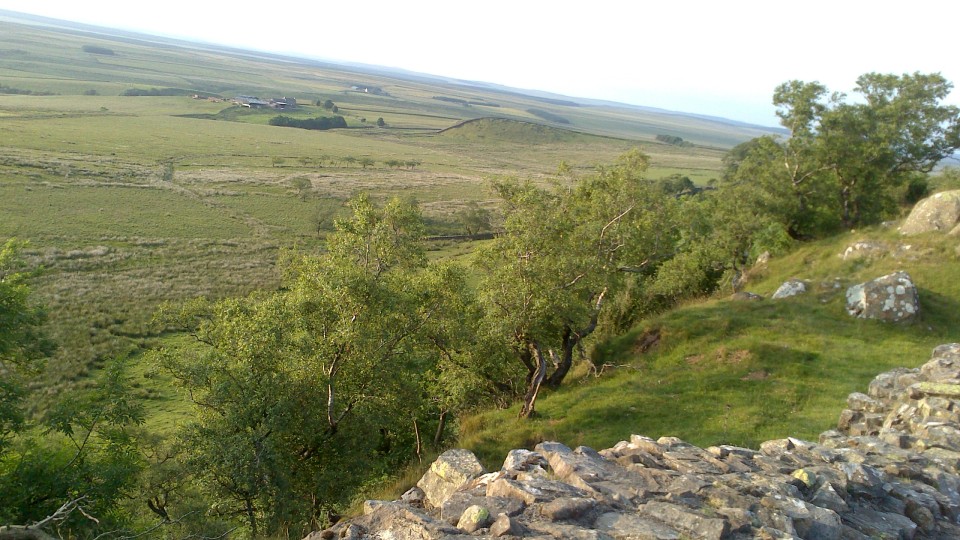 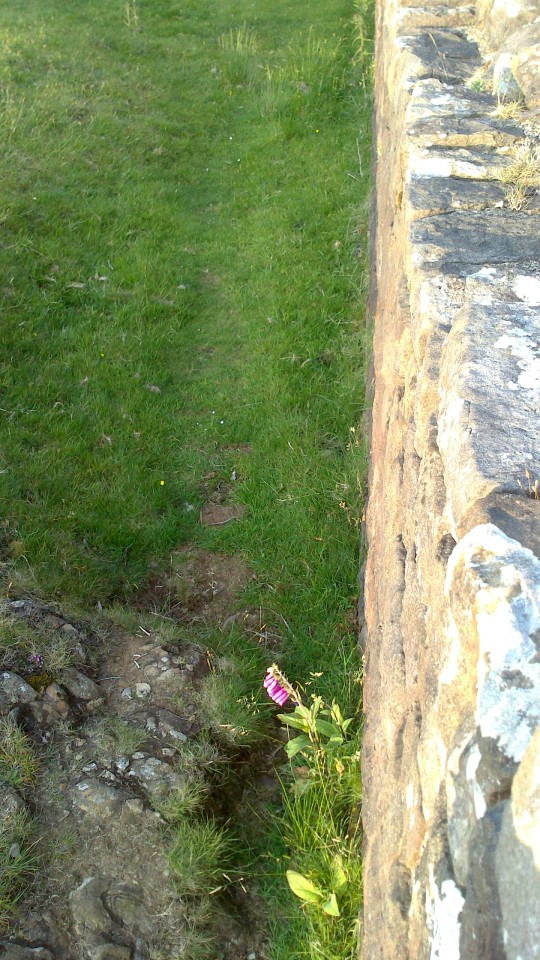 The Vindolanda Tablets are palm-sized wooden blocks that were used to send messages written in ink. The wooden tablets were folded in two like a sheet of paper for despatch. A number of these were found recently, buried in the mud, their messages perfectly preserved between the folds. The tablets provide touching personal insights into the lives of the legionaries who lived in this outpost of their empire, far away from their own home. In one, a legionary thanks a distant colleague for sending socks and warm underclothing; in another, a general’s wife invites the wife of a fellow officer to dinner.

Which City is This?

It has a big wheel, but it isn’t Vienna. 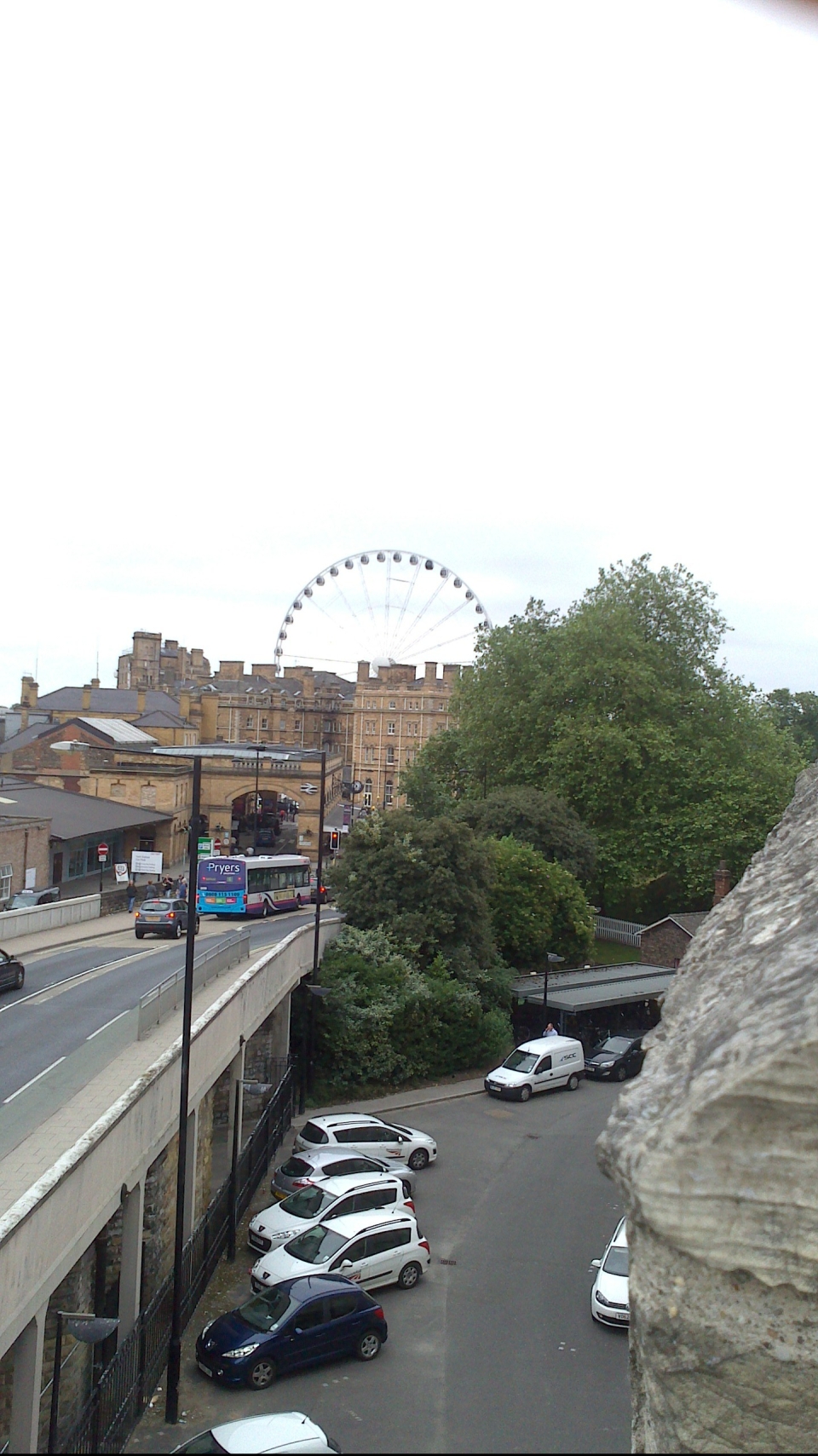 Here’s a clue (below). This Roman Fortress Gate is now a Gents toilet. The first three correct answers will get a free copy of my forthcoming anthology: THE IRONWOOD POACHER AND OTHER STORIES, when it appears in October this year. I look forward to your answers and inspired guesses.

Cat in a Sink: En Route to Lamma Island

Here is Bounty having a last sit in the kitchen sink at Kanalstrasse in Vienna before moving to temporary accommodation and subsequent air cargo flight to Lamma Island, Hong Kong. Simba flies with her too, of course.