The Lost Soul of a Nation

The impassioned plea (text in italics) was originally published in the wire.in (link below). The author is Avay Shukla, a retired Indian Administrative Service (IAS) officer. The IAS and IPS (Indian Police Service) cadres, numbering close to 10,000 nation-wide, represent the backbone of the country’s administration. Although beholden to their political overlords, there are a few dedicated public servants whose primary loyalty is to India’s secular constitution. This is one of the miracles of India, a nation of 1.3 billion that struggles to hold on to Gandhian ideals while ruled by a national government that tacitly condones communal disharmony.

Although the letter below specifically refers to India, this searing indictment applies equally to the political ruling class in most countries, with very few exceptions. One exception in this bleak Indian picture is the state of Kerala whose Communist-ruled government has made extensive provisions for the welfare of migrant workers. As the Economic Times notes: “Amid lockdown: Migrant workers a content lot in Kerala.” 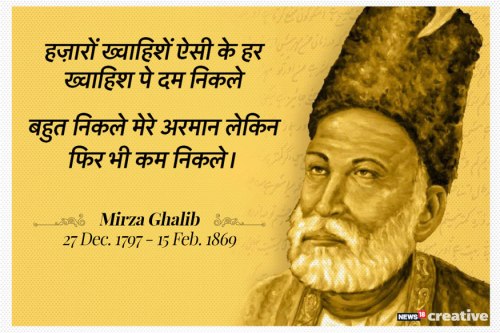 ” Umar bhar Ghalib yahi bhool karta raha,
Dhool chehre par thi, aur aina saaf karta raha.”
“All his life, man made this mistake
The dust was on his face and he was cleaning the mirror”
Actually, this piece is not just about me- it’s also about you, dear reader. Look into that cracked mirror. Do you feel any shame, just a little , for what we have become, for the lost soul of a once great nation?
Note: Poet Mirza Ghalib (1797-1869) was born in the last days of the Mughal Empire and died in British India. Obscure during his lifetime, he is today considered one of the foremost Urdu poets of India and Pakistan.

Growing out of Oneself

Personal growth is the theme of most management text books and self-development manuals. A passage by Lebanese-American poet Kahlil Gibran is a timely reminder in this fearful age of Covid. It reminds us that death is only the ultimate step of self-development and growth in the journey of life.

“It is said that before entering the sea, a river trembles with fear. She looks back at the path she has traveled, from the peaks of the mountains, the long winding road crossing forests and villages. And in front of her, she sees an ocean so vast, that to enter there seems nothing more than to disappear forever. But there is no other way. The river can not go back. Nobody can go back. To go back is impossible in existence. The river needs to take the risk of entering the ocean, because only then will fear disappear, because that’s where the river will know — it’s not about disappearing into the ocean, but of becoming the ocean.”

Carbon Capture and Storage – too expensive to save humanity? — Electrifying

Carbon Capture and Storage (CCS) can be practised in two ways, naturally and mechanically. The natural approach is much about planting additional trees[1], algae in the sea[2] or even the most giant creatures on earth, whales, contribute to natural CCS by consuming massive amounts of carbon within their lifespan of up to a century[3]. The mechanical procedure […]

via Carbon Capture and Storage – too expensive to save humanity? — Electrifying

The hydrogen economy may be only a decade away, or more. Some people think that battery electric vehicles will replace combustion engines in the interim. Whatever the case, there are exciting new developments happening in the world of hydrogen. Here’s a shared post from the blog Electrifying entitled Hydrogen – unleash the beast.

Thousands of thinking people all over the world are now beginning the see the current corona pandemic as an opportunity to radically restructure the world; to reduce our consumption of resources from a finite planet; to recalibrate a global economic system that enriches the 1% while impoverishing the 99% (and the planet in the bargain), to rethink our agricultural systems, currently dominated by large holdings and industrial corporations, to small farms and tenants who look to enhance biodiversity rather than only being driven by increased yields and profit.

In whichever country in the world we live in right now, the crucial question our governments will deal with in the immediate aftermath of the current crisis will be: which of the following systems will be bailed out first: Banks and the financial system; major food corporations and large producers; the biggest energy utilities; airlines and the transportation system.

From the point of view of the average citizen, all of them are of equal importance. Most important, of course, is access to the most basic needs of life; food, clothing and shelter. In extraordinary times like this, when governments throw fiscal discipline overboard in order to preserve life, the idea of Universal Basic Income (UBI) suddenly looks attractive again. Here’s a link to a Wikipedia article on UBI that shows how the idea was first touted in the early 16th century in Sir Thomas More’s Utopia.

The lockdown continues, and Nature flourishes

Would the UBI plan work? In the best of all possible worlds, it certainly might, considering that the assets of the above-mentioned 1% would cover the costs. Is the UBI plan feasible? Who knows? Or as Shakespeare had Hamlet expressing doubt, “Ay, there’s the rub, for in that sleep of death what dreams may come when we have shuffled off this mortal coil, must give us pause.” On the other hand, a modern philosopher reminds us that a good crisis should never be thrown away. In other words, who knows what solutions may be workable in these extra-ordinary circumstances as we enter a new paradigm of learning, living, and learning to live.

Here’s a story for the dwindling number (I hope) of climate change skeptics who still look forward to business-as-usual, or more-of-the-same as a blueprint for the rest of the 21st century. A HuffPost report in November reveals that, way back in 1956, the coal industry accepted the reality of global warming and did not feel threatened by it (the problem lay one generation in the future!). The same is true for the oil industry, according to a spate of lawsuits brought against it by various groups and several US States. In December 2019, Exxon won a major climate change lawsuit brought against it by the state of New York, but there are many more on the way.

The remarkable thing here is that the science of impending climate change was uncontested as long as the threat to the profits of fossil fuel corporations lay decades in the future. Here is the paradox at the heart of the debate about climate change. In the early days of global climate modelling, in the 1970s, the models were relatively unrefined and scientists themselves did not stake strong positions based on the results of their own models. Additionally, the majority of scientists subscribed to the myth that science has to be neutral in order to serve as an impartial referee that floated above the discussion, distributing facts where necessary. In reality, the discussions on the ground were becoming messy. The science began to be disputed as the soon as the deadline for meaningful action neared. Powerful polluters, mining companies, oil corporations, muddied the waters (both literally and intellectually) with arguments that played on statistical uncertainty to kick the decision a few decades down the road.

Meanwhile scientists sat back and redoubled their efforts, striving for ever greater accuracy in their models. They reasoned, logically, that once their results achieved greater accuracy, people would come round to their point of view. But that is not the way the world works. It has little place for logic and reason. So they toiled on, with ever more dense reports of double- and triple-checked facts and innumerable citations. Meanwhile the world went on guzzling gas and emitting CO2, methane, and worse. This is the point when the world drowns in despair or A MESSIAH APPEARS. Lo and behold! We have our unlikely messiah. Hundreds of thousands of school children, young people. Their face is that of Greta Thunberg whose single-minded focus has made her the global symbol of the movement. 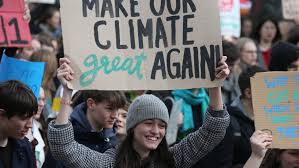 If we look at simple facts, solutions to the problem are much more doable than we think. Elon Musk is mocked for saying that 10,000 sq. miles of the Nevada desert covered in solar panels could produce all the energy requirements of the United States. He’s right of course, but this is only intended as an example of scale. It wouldn’t be safe or desirable to have the entire nation’s energy needs produced at a single source. The following is a better example. An engineer acquaintance, Klaus Turek, calculates that in the case of a temperate country like Austria, just 0.391% of its surface covered with solar panels is sufficient to meet its electricity requirements. That works out to about 328 sq. km. for the whole country. The area covered by buildings is 2.4%, however (2,013 sq km approximately). Therefore, just 16% of the currently available roof space would be sufficient to cover all of Austria’s current electricity needs, with plenty left over for expansion.

Why did Gandhi Commit Suicide?

Fake news is alive and flourishing in all parts of the world, including in India, where WhatsApp and Facebook (among others) are helping to spread misinformation (inaccuracies) and disinformation (intentional inaccuracies) about events around the world. The above headline about Gandhi’s death apparently appeared in a school textbook in Gujarat, and probably represents ongoing attempts by rightwing Hindu zealots to rewrite history to the party’s liking.

Biology teaches us that life forms flourish when they exist in robust interplay. An increase in biodiversity in an ecosystem results in increased productivity in the system, increased resilience against natural disasters and increased stability overall. In our tech-driven century, the opposite is happening in the financial and business world. Commerce and economic activity are being increasingly dominated by a handful of powerful corporations: Google, Apple, Microsoft, Amazon, Facebook, Walmart, Tencent, Alibaba, and so on. The pattern is replicated within countries as well. In every case, in every country, Ambani, Adani, Li Ka-shing, Bezos, Zuckerberg, Ma… whatever their names, each and every one will use every means at their disposal to protect their wealth; economic biodiversity and planetary health be damned. It is truly easier for a camel to go through the eye of a needle…

It is time for us, planetary citizens and voters, to stiffen the spines of our politicians so that they can take steps to curtail the planet-destroying power of the Putins and Murdochs of this world. It won’t be easy, but the survival of the planet is at stake. Unlikely beacons of hope at this juncture are the protests of thousands of school children around the world led by a Swedish sixteen year-old girl with Asperger’s. Theirs is an example for every one of us to follow, in every way we possibly can. The next few years will decide whether we can salvage our planetary heritage for coming generations.

aviott
Create a free website or blog at WordPress.com.