Wonderful to be in Vienna again, elegant city, at the turn of the year. Wandering around near the Naschmarkt, a coffee house with a page-long list of different kinds of coffee on order. And on the next page, an intriguing entry: tiger milk. The milk was served hot in a simple straight-sided glass, at the bottom a tawny layer of honey, with a generous dollop of rum in the mix. Stirring the milk spread streaks of honeyed tigritude through the glass; together with the rum, a heart-warming concoction for a cold afternoon.

Later that night strolling through the beautifully illuminated festive streets in the pedestrian areas of the first district, there is an early hint of the crowds of tourists about to arrive in town to spend New Year’s Eve following the various stations of the Silvester Pfad, a new year celebratory trail that winds through the city with frequent stops for champagne, sekt, mulled wine, a selection of foods ranging from sausage stand fare to caviar, smoked salmon and, increasingly, choice vegetarian and vegan fare. There are stages where live music is played, ranging from classic to rock and pop and staid or lively dancing to suit one’s temperament. A fitting end to a year that started with work in a Habsburg castle, followed by retirement, the publication of two collections of short stories, a move to an idyllic tropical island with a population of around 6000 and no cars, and now back to this beautiful city for a short while.

What lies ahead in 2014? I don’t know, but look forward to it as eagerly as to the next page of an unputdownable book. I sincerely wish the same sense of excitement and anticipation to anyone who reads these lines. Good wishes and good fortune to you and yours in the new year!

Keeping an Old Man in Poverty

Sarojini Naidu, a poetess and close friend of Mahatma Gandhi, was a feisty, outspoken woman who was totally unfazed by his growing rock-star status (by the standards of the 1930s) and global celebrity. She berated Gandhi for his attempts to live in poverty, as a semi-recluse, in his ashram on the banks of the Sabarmati River, at that time on the outskirts of Ahmedabad. “Do you know how much it costs every day to keep you in poverty?” she is reputed to have asked him. Gandhiji’s response is unknown, but it is clear he was not offended, because he knew the accusation was true. He knew how much every train journey in a simple third-class railway carriage cost the state because of the adoring millions who flocked to see him. They had to schedule special trains and reserve a whole compartment for him because of the crowds. Gandhi knew and accepted this. In criticising such  ‘extravagant’ expenditure, I see a parallel between critics of Gandhi and of Jesus, or even of Pope John Paul II, great men all, regardless of religious belief.
In the case of Jesus, all four gospels report that he allowed a woman (allegedly of ill-repute, a composite Mary Magdalene) to wash and anoint his feet with expensive perfume. His disciples were indignant, muttering that the money could have been given to the poor. In the case of John Paul II, he came to the papal throne as a robust 58 year old who loved physical exercise. At one of his early press conferences, he was asked why he had used precious Vatican resources to have a swimming pool built. The simple answer that silenced critics: because I like to swim.

Critics of Gandhi and his methods proliferate in India. There are probably more true practitioners of his philosophy around the world than in his native country. Why is this? More of a-prophet-is-not-honored-in-his-own-country syndrome? Not quite. Maybe because so much lip-service is paid to his ideals by politicians and policy-makers in India, while millions continue to live in poverty, lacking any kind of basic infrastructure. Critics attribute the failure of successive generations of Indian leaders to Gandhi and his message. In doing so they forget that he was a leader engaged in the creation of myths to forge the collective will of a nation for independence. A nation is nothing more than the manifestation of a commonly held body of concepts and ideas. He succeeded brilliantly in creating these myths. He was also wise enough to see that the party that brought India to independence should be disbanded soon after the process of nation-building began. But his life was cut short.

One recent attempt to live a self-sufficient life outside the cash economy for a year is recounted by Mark Boyle, a young Irishman inspired by Gandhi, living on a farm near Bristol. The book of his experiences is highly recommended by this blogger. The Money-less Man: A Year of Freeconomic Living by Mark Boyle. All profits from the sale of this book go towards his foundation that works towards greater free sharing of assets and resources. His message is doubly appropriate during this Christmas and New Year season, when so many of us suffer from simply having too much stuff around us and exchange superfluous gifts that are perhaps wordless substitutes for true communication.

Amory Lovins visited IIASA, a research institute in Austria, in the summer of 1976. He was modest and unassuming, or brash and outspoken, depending on which side of the energy debate you were on. He gave a talk during his stay there. The substance of that talk was published in Foreign Affairs in October of that year in an essay called “Energy Strategies: the Road not Taken?” See link below for the full-text of this 10,000 word essay-free registration is required.
http://www.foreignaffairs.com/articles/26604/amory-b-lovins/energy-strategy-the-road-not-taken

This essay turned out to be the most widely read, and most frequently reprinted, article in the history of this influential journal. Lovins has, in the intervening years, been awarded 11 honorary doctorates and won a host of significant international awards for his pioneering work in energy efficiency, intelligent manufacturing, bridging the divide between proponents of renewable energy and the established fossil fuel companies; not bad for someone who quit Harvard, and later did not graduate from Oxford (they would not allow him to pursue a doctorate in Energy). In 2009, Time magazine named him one of the world’s 100 most influential people. He has won the Blue Planet Prize, the Volvo Environment Prize and dozens of other awards (see the Wikipedia entry for a long, but incomplete listing).
Amory Lovins is a hero of energy who deserves the status of a rock star (which he almost certainly won’t achieve outside energy circles), so this blog entry is an attempt to widen the circle of his admirers. I’ve been among them since 1976. Take 36 minutes of your time to listen to a conversation between Amory and Jules Kortenhorst, his successor as CEO of the Rocky Mountain Institute (RMI) that he founded in 1982. For those of you who don’t have the time to listen to the whole talk, here is a selection of key phrases and sound bites that grabbed my attention while listening to the conversation.

hierarchy of needs… save the world, have fun and make money, in that order (when asked about the goals of the RMI)
amazing people…. increasingly hiring on attributes and aptitudes rather than resumes and experience (about the people who work for RMI)
not simply a think tank; a think and do tank (about RMI)
China last year got more new electricity from non-hydro renewables than all fossils and nuclear sources combined. Nobody expected that, but that’s the new normal. (about energy developments in China)
China now burns more coal than everybody else put together, they are also the world’s biggest oil importer; they don’t like that at all…
humans are the first self-endangered species on this planet.
solar cell companies are scaling faster than cell phones did…
applied hope… creating the basis for that hope every day… (about the role of RMI)
cost-effective energy to people at the bottom end of the pyramid.(about the important role renewables will play in the world energy mix, and how developing countries are racing ahead and taking the lead)

There is no end of picturesque walking trails on these islands. The landscapes vary from lush tropical jungle undergrowth to magnificent seascapes interspersed with clusters of urban dwellings, scattered villages nestling among rocky bays. Paths snake between valleys and wind their way around hills. There are birds to find, if one is patient and quiet; various finches, bulbuls, the occasional flycatcher, kingfisher or alexandrine parakeet. The last named probably escaped from captivity and bred locally in the wild over the past decades. There is a colony of them in the middle of the city in Kowloon Park. If you’re lucky, when you climb a few hundred meters to the tops of the hills you will come eye to eye with a black kite, engrossed in its circling, soaring search for small prey. 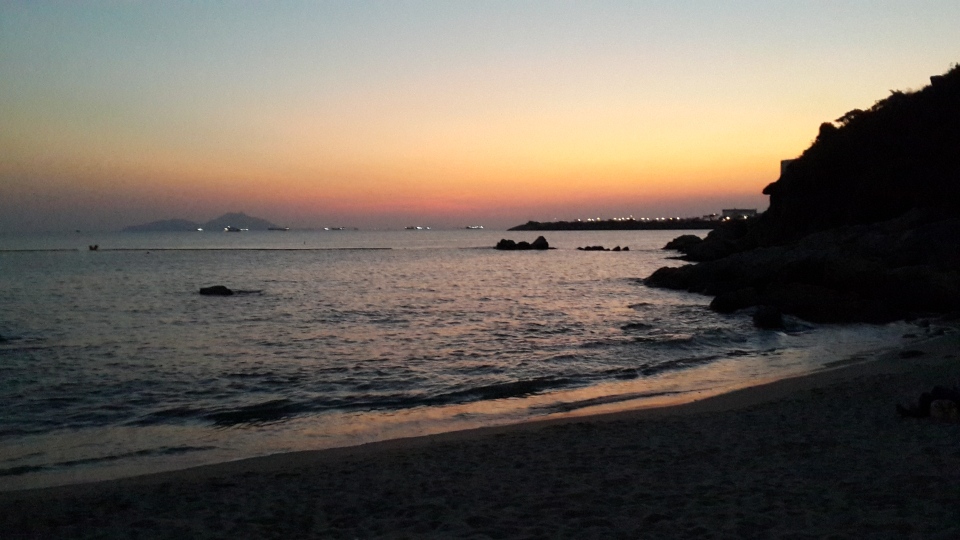 One comes across dog latrines at intervals along these trails, presumably set up by optimistic bureaucrats to provide a public convenience for the many pet dogs on the islands. Totally unnecessary, since the dogs are too smart to use them. There is a blooper scooper law in place and most dog owners are meticulous in clearing up after their best friends. The dogs are smart enough to know that their owners stroll around with disposable plastic bags in their pockets, so why bother look for a canine toilet when any stretch of street pavement will do? 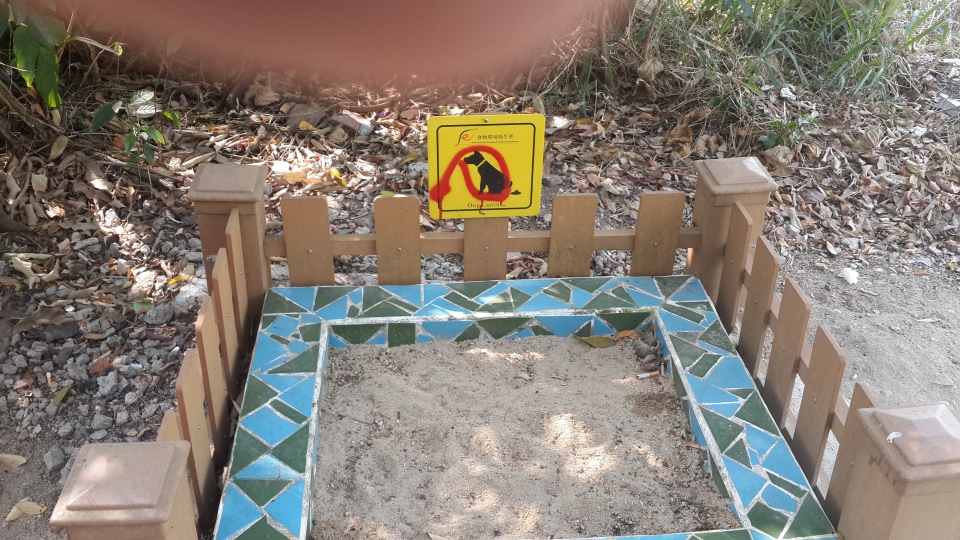 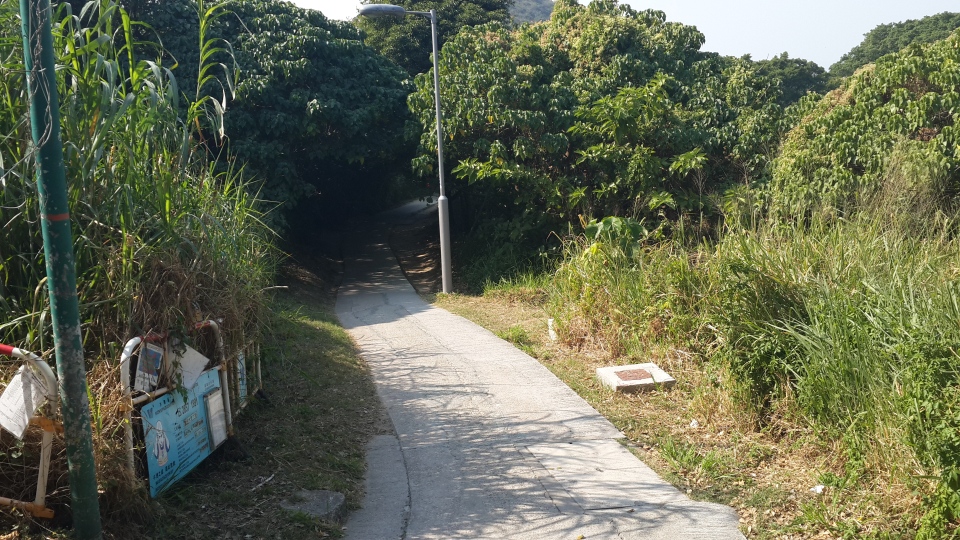