“Let yourself be found by a book” is the slogan that captures the spirit of this bookstore in the heart of old Vienna. The Ruprechts Viertel, or quarter, dates back to a venerable several decades BC (if not earlier) and is the oldest part of Vienna. Located just a short stroll away from a crowded St. Stephen’s Cathedral Square, the spiritual and geographic heart of Vienna, on a quiet side street, this is the quintessential booklovers’ store. Run by bibliophiles for bibliophiles, the shelves house an eclectic collection, books densely packed from floor to high ceiling. If you don’t find what you’re looking for, ask one of the knowledgeable owners who take turns minding the store; chances are they have it in stock and will quickly find it for you.

This is a store that keeps literary traditions alive in several ways, regularly hosting book readings by itinerant authors, celebrating 14 June (Bloomsday) with a vegetarian breakfast that Leopold Bloom would approve of. In James Joyce’s Ulysses, Leopold Bloom sees someone “chump chop from the grill. Bolting to get it over,” and decides to go meatless. Many years ago I was one of a crowd in the packed bookstore when Anthony Burgess roared in, trailed by the British Ambassador, and plunged into a vigorous reading of passages from “A Clockwork Orange,” and “Earthly Powers” before signing copies of his books and roaring out again, leaving behind an empty stillness, as though he had taken all the air out of the room with him. On another occasion, Carl Djerassi, a chemist and co-inventor of the birth control pill, who later became an author and playwright read excepts from his science-in-fiction in the store.

The most recent reading on the premises was the author of (ahem) “The Ironwood Poacher and Other Stories.” If you find yourself in old Vienna with some time on your hands, my advice to you would be, wander past the Synagogue on Seitenstettengasse, in the heart of the Bermuda Triangle (so-called because the area is packed with eateries and drinkeries where you can lose yourself) to this sign on Sterngasse 2 and let yourself be found by a book. 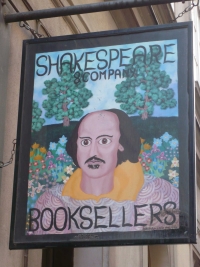 By aviottjohn in Uncategorized on May 17, 2014.
← Three Cheers for Perovskites Adam and Eve: the better version →