Home » history » Stepwells and Johads: Digging into the past

Stepwells and Johads: Digging into the past

More on Rajasthan. One of the places on this summer’s itinerary was a village called Chand Baori. “Do we really want to go there?” I asked the driver and tour guide. “I’ve never heard of it.” “Very old well, from the 8th century,” he assured me. “If you like we can go.” Which was a roundabout way of saying yes, so we went.

On a trip to the ruins of Hampi (1343 to 1565, capital of the Vijayanagar empire) a year ago, we had seen a 500 year-old stepwell that was a work of art. It had not run dry in living memory and had presumably been in active use by the local populace for more than 5 centuries. Hampi lies in a zone that tends to the semi-arid and receives around 400 mm of rain a year compared to ca. 900 mm for a typical Mediterranean city (in this example Ostia Antica, the harbour city of ancient Rome). 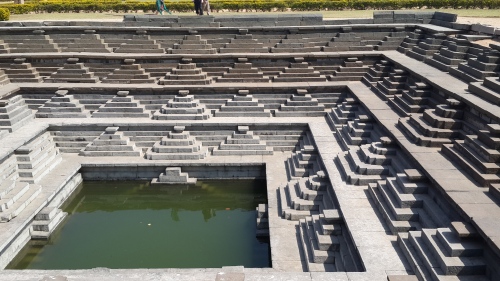 However, Hampi’s modest rainfall is a veritable flood compared to the sparse annual haul (ca. 200 mm) of the desert area around the flourishing city of Jaisalmer in Rajasthan. Founded in the 12th century, Jaisalmer was an important node in the overland silk route and well connected with Europe. A great deal of knowledge and deep understanding of sustainable living in harsh climates accumulated in this part of the world long before scientific knowledge became codified and PhD’s in hydrology were awarded by the world’s universities.

Anupam Mishra is one of the pioneers of the 20th century revival of ancient water harvesting techniques in Rajasthan and other arid parts of the country. (See a biography here. http://en.wikipedia.org/wiki/Anupam_Mishra ). A quiet Gandhian and a modest man, he is one of the foremost Water Warriors of the world. Anyone who can spare 17 minutes to listen to a witty and humorous TED talk he gave in 2009 is guaranteed enlightenment on the continued relevance of rainwater harvesting in the world today.  http://www.ted.com/talks/anupam_mishra_the_ancient_ingenuity_of_water_harvesting

Despite the fierce July heat, our detour to Chand Baori was well worth the effort. The stepwell in the village was more ornate than anything we had seen so far. Much more than being a mere source of water, it was obviously designed as a public meeting place and center for social interaction where one could find cool relief by the water’s edge, two or three stories underground. 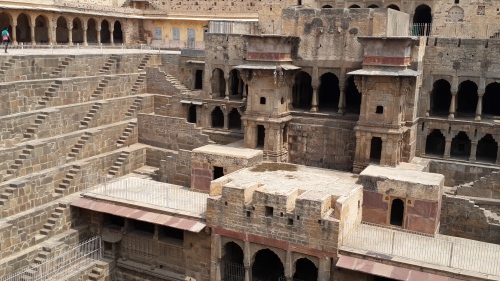 Ornate carvings adorn every pillar and statue around the well

Rajendra Singh is another Water Warrior from Rajasthan who has won awards around the world for his work. Nominated by the Guardian newspaper in 2008 as one of the 50 people most likely to save the planet, he trained as a doctor, and was inspired by Gandhian ideals to set up a practice in the remotest desert village he could find. When he got there, literally at the end of the road, he found that what the villagers needed more than medicine was water. http://en.wikipedia.org/wiki/Rajendra_Singh

With no money and only hand tools at his disposal, he began with a few friends to dig out an abandoned “johad,” a traditional water catchment reservoir. The rains came. The johad retained a little water. This was the beginning of a virtuous cycle that was copied by neighbouring villages. In the course of a few years, over 5000 earthen check dams or johads have been built in Rajasthan and neighbouring states of Gujarat, Madhya Pradesh and Andhra with rising water tables as a result everywhere.

Rajendra Singh is now known as the rain man of Rajasthan, having brought water back to more than 1000 villages and for restoring the flow of all five major rivers in the state. In the words of one of my personal heroes, Amory Lovins, quoting Pogo Possum: “We stand here confronted by insurmountable opportunities.”

It is time for the world to grasp them. Click the Follow button below for alerts to forthcoming postings on this blog and find out how people around the world are grasping these opportunities.

Seemingly built for eternity. The well’s depth bears testimony to the long-range vision of its builders

By aviottjohn in history, travel on August 27, 2014.
← The Changing Landscape of Religion Disinviting a Hornet →