There are 4 cave temples on a rocky hill above the town, all carved out of the giant rocks that form the hillside. The first two caves are dedicated to Shiva, the third (and grandest) cave is dedicated to Vishnu. Shiva and Vishnu are the second and third members of the Brahmanical Trinity, the first being Brahma, who is traditionally accepted as the creator of the entire universe. 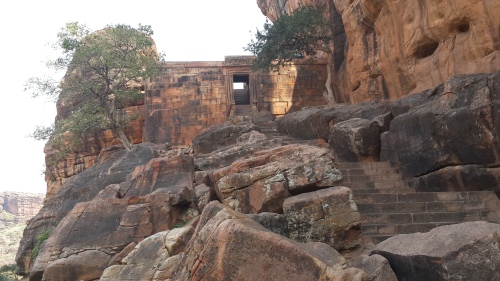 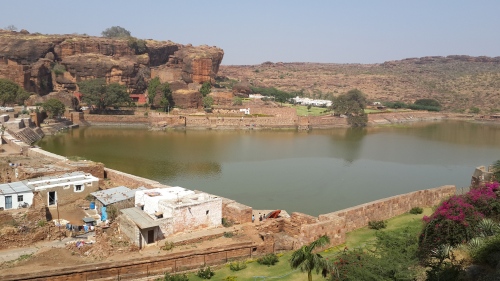 The fourth cave is a Jain temple, adorned with an image of Mahavira, the last of twenty-four teerthankaras, or spiritual role models in Jainism. Mahavira was born into a royal family around 540 BC somewhere in today’s Bihar state in India and he reputedly lived till around 468 BC. This makes him a contemporary of Gautama, the Buddha, who lived from around 563 to 483 BC according to the latest reckoning of historians and scholars. Further coincidences in their lives abound. They were both born into princely families. They both lived traditional family lives until they left their homes at the ages of 30 (Mahavira) and 29 (Gautama) and wandered in search of spiritual truths. Interestingly, although Gautama was born in today’s Nepal, he reputedly achieved enlightenment while meditating under a pipal tree in Bodh Gaya, in Bihar, where Mahavira was born. The present day state of Bihar is relatively poor, but was a great center of learning and spirituality at the time. One of the earliest universities in the world existed at Nalanda, from the 5th to the 11th century AD.and lies just 90 km from Bodh Gaya. The Badami cave temples are in Karnataka state, not far from the scattered ruins of Vijayanagar in Hampi.

By aviottjohn in history, Uncategorized on February 11, 2014.
← Hampi: On the banks of the Tungabadhra Banyans, Cuckoos, Cannonballs and Theosophy →