Borneo is the third-largest island in the world. Some of the world’s carbon is locked up in its tropical forests, a good reason to leave the forests untouched, but a strategy that condemns the locals to a life of relative poverty. Enterprising as people are, they find it profitable (and it affords their families a decent living wage) to cut down a few acres of tropical forest and plant oil palms instead. Harvesting around 10 acres of oil palms yields an annual income of US $ 20,000 a year. By doing this, they are depleting the world’s remaining store of carbon, but does the rest of the world have a moral right to object, having already done so in the more affluent parts of the world over decades and centuries past? When asked, a small farmer shrugs and points to the undulating stretches of forest behind him. “I’m taking only 10 acres, and there’s over 100 million acres of untouched forest behind me.” Which brings us to the moral conundrum of climate change. A similar answer is heard from anyone who drives a car or flies to a holiday destination in a plane (yours truly, in this case); it’s just one more drop in the ocean.

This way to the gaint 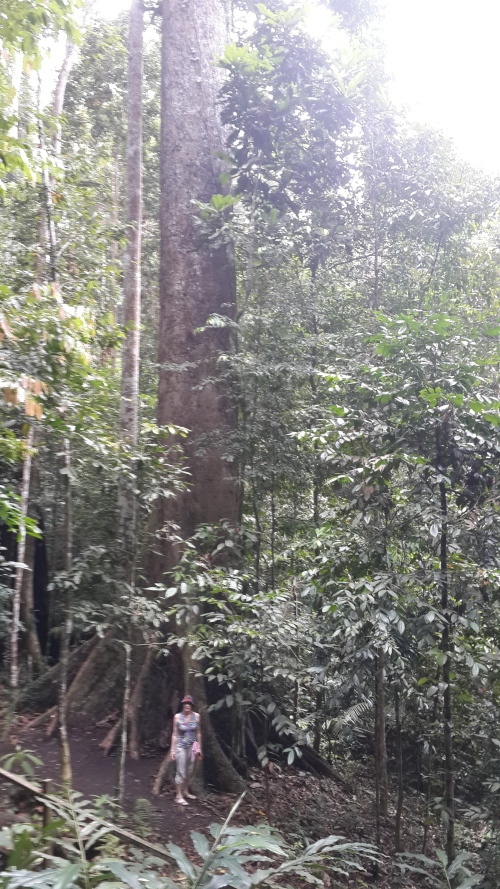 The giant among giants. 88m to the crown

Surprisingly, in a tropical jungle, the undergrowth is not dense. One can see the forest and the trees; but not the leeches!

Talking to a businessman in Tawau, the third-largest city in the Malaysian third of the island, he spoke of the pains taken to extract only some of the most valuable timber using heli-logging methods (with large helicopters) to lift harvested tree trunks from the jungle, leaving the surrounding growth and trees untouched for future generations, and with no access roads to encourage future encroachment. Clear-cutting, he assured, is practiced only on second and tertiary growth forests that are replanted for further harvesting. In Kalimantan, I was told, lightning strikes (both celestial and man-made) set fire to thousands of acres of primal forest, and these clearings are later used for palm oil plantations.

Orang Utans are shy, solitary creatures, which is just as well for them, since encounters with humans, their close relatives, has not been very beneficial to them. At the Rasa Ria Orang Utan rehabilitation center, and several other places on the island, considerable sums of money are invested in rescuing orphan orang utans from the wild. They are painstakingly rehabilitated over a period of 6 to 8 years before gradual release again into the wild. The rangers entrusted with the task are obviously dedicated to their charges and proud of the natural wealth of their island. 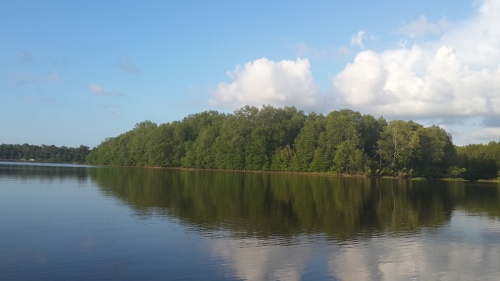 After nightfall, fireflies emerge from the trees like thousands of falling stars. During the daytime, proboscis monkeys, looking like simian philosophers, forage in the undergrowth

Will tourism provide for a sustainable Borneo? Only time will tell. Actually, what happens there is up to us, as we help to shape the future with our cumulative thousands and millions of daily actions.

For more by this author, visit his pages at Amazon or on Google Play

By aviottjohn in travel on October 29, 2014.
← The lake of deeds, and a dyslexic scholar A FRIWAFTT* essay about Hong Kong →