The story of oil begins more than 2,500 years ago. Reliable indicators show that in China people were drilling a mile deep with bamboo pipes to recover natural gas and liquid hydrocarbons that were used as a source of fuel for fires. This was before the start of the Han dynasty in 400 BC. See this fascinating slide presentation on the progress of drilling technology by Allen Castleman, a self-confessed oil redneck. 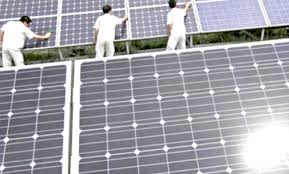 The modern oil age is popularly considered to have started in the 19th century with the use of internal combustion engines for everything from pumping water to transportation. A glorious age, but now it’s time to move on (pun intended) to other fuels. As Saudi oil minister Sheikh Zaki Yamani predicted more than three decades ago, “the Stone Age did not end for lack of stones, and the Oil Age will end long before the world runs out of oil;” a statement at once prescient, rueful and flippant. In today’s lugubrious world, they don’t make oil ministers like that any more.

As a reminder that the world turns and turns and comes full circle in more ways than one, here’s a parting thought; an article from the Guardian of 30 January 2014. In 2013 alone, China installed more solar power than the entire installed capacity in the US, the country where the technology was invented. There is a caveat to the article that some of this newly installed capacity is not yet connected to the grid but, once installed, connections are only a matter of time. 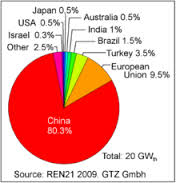 By aviottjohn in global warming, Renewables on December 4, 2014.
← Why do I write? revisited. What 132 schoolchildren should teach us. →