Home » Uncategorized » The Banquet and afterwards…

The Banquet and afterwards…

The wedding banquet was a long drawn out affair that began at seven in the evening in a brightly lit and freshly decorated marriage garden. Guests trundled in from 7.30 on, with a constant stream of arrivals greeting friends and relatives. Street food was prepared fresh by a handful of cooks who constantly replenished the buffet tables. Small molded plates were available, pressed from the large dried leaves of a local tree, the ultimate in recyclable convenience. Marriage gardens are a big business in India, by the way, and even the most modest ones enjoy a healthy cash flow, while upmarket ones in urban areas are more like themed parks that can cost € 50,000 a night or more. It was mind-boggling for me to think of the amounts of money being spent on the most lavish weddings. In contrast, the one we attended in Agra was a masterpiece of careful budgeting that looked three times more expensive than it actually did. 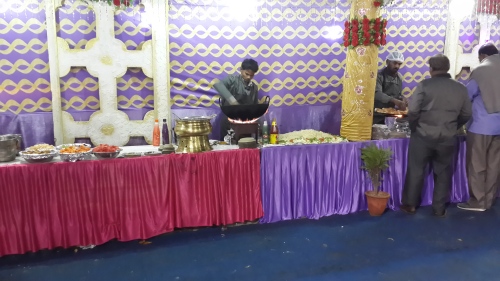 Delicious street food made to order on demand

While all this cooking, eating and socialising went on in the marriage garden, the groom arrived in a carriage drawn by two white horses, accompanied by lights and music. A short while later, bride and groom mounted a raised platform where the actual ceremony is to take place. Traditional Indian weddings are a delight for the guests, who enjoy hours of free food and fraternity, while the bride and groom endure a long drawn out ceremony dictated by religious rites and countless local traditions. The couple are finally wedded at dawn, by this time numbed to exhaustion. This could be a reason why arranged marriages last and divorces are rare. However, as traditions die out, there are many signs of change. 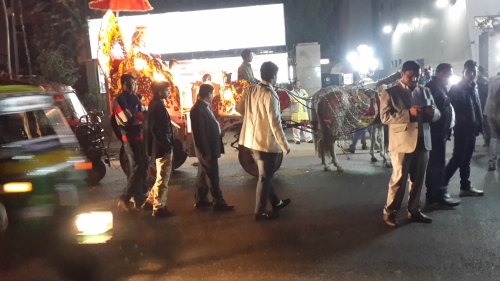 The groom arrives in a horse drawn carriage

The raised platform on which the exhausted couple will finally be wed.

Signs of change next morning everywhere, ubiquitous cell-phones, ads for online shopping, fat cars muscling their way into narrow, overcrowded streets. But after last night’s banquet, we will rest a couple of hours and then drive to Deeg, the palace that time forgot. More in the next blog.

By aviottjohn in Uncategorized on December 14, 2015.
← Monkey Business at an Indian Wedding Deeg: The Palace that Time Forgot →