Even today, in the first half of the twenty-first century, thousands of villages in Africa and Asia (mainly in India) remain off-grid and have no access to electricity. Ever since a three-month stay in Kenya and Tanzania in 1985,  I have dreamt of bringing solar lighting to the smallest villages on these two continents. In Kenya I was astounded to see that, as early as 1985, a few rural families had bought individual solar panels connected to used car batteries to power a single light bulb and the occasional television set. They did this because they had no hope of access to grid electricity in their lifetimes. It’s even more astounding to think that in affluent countries today, the majority of people who drive $ 20,000 cars consider solar power unaffordable without government subsidies. No wonder the world is hotting up! Such economic calculations show how skewed our thinking is.

Of course it was obvious that this journey of a thousand miles begins with a single step. Less obvious was what this first step should be. Mhairi made the first step on a recent (November 2015) visit to a village on the outskirts of a tiger sanctuary in Rajasthan. She made contact with the owner of a handicrafts shop on the edge of the Ranthambore national forest and tiger reserve who helps village craftswomen earn a living by marketing the beautiful tiger paintings, patchwork quilts with mirror designs and appliqué fabrics they make. Dharamveer was thrilled to hear about the idea of installing solar lighting for the nearby villages. He immediately took us to visit three of the 10 surrounding villages. These villagers have limited or no access to electricity. Even the few homes connected to the grid have power only 2 or 3 days a week, so they end up spending 2 to 3 hundred rupees a month on electricity bills or on kerosene for inadequate lighting with lamps. The proposal to pre-finance solar lamps for each household in the village was met with much enthusiasm. They were quite willing to pay 200 to 300 rupees a month for reliable solar lighting. And they were delighted to hear that, at a price of just 499 rupees (US $ 7 at current exchange rates), the lamps would belong to them within three months. Apart from the environmental costs of burning kerosene, the biggest drawbacks are cost and inadequate light for children studying or doing homework. 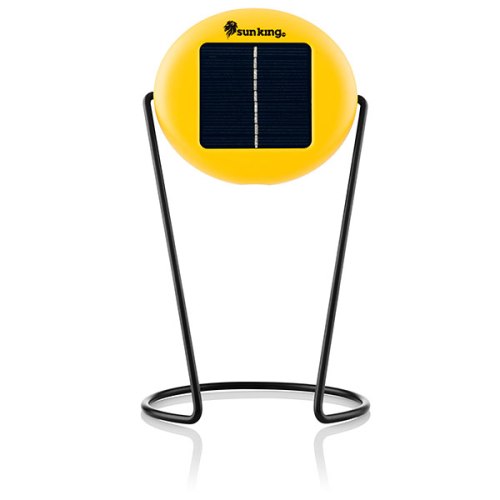 The idea we propose is quite simple. We plan to finance around one hundred of these solar lamps initially, to be distributed to a number of households in the ten target villages. Presumably they will be paid for in 3 months from the money the villagers save from their kerosene and electricity bills. We will request voluntary contributions for another 2 months and use the extra money to expand the circle of recipients till all households in the villages are covered. After which one can think of more elaborate systems, for example, like the model shown here that costs 7000 rupees or US $ 100 at today’s exchange rates. Greenlight is a for-profit company started in the US by three engineers, two American and one Indian. Their products have received good reviews in the international press.

The Sun King Home 120 is priced at approx US $ 100, can power USB devices and mobile phones.

We have decided on Greenlight’s Sun King model range, based only on our own internet research and news reports. Readers of this blog are invited to give feedback or share their own experiences with different models. I can envisage offering a range of different systems based on cost and reliability. I look forward to hearing from you.

By aviottjohn in energy, global warming, Renewables, Uncategorized on December 27, 2015.
← Deeg: The Palace that Time Forgot Books on Google Play →