Fifteen kilometers southwest of Chiang Rai stands a surreal, snowy white temple. It is known as the Wat at Rong Khun, but tourists simply call it the white temple and flock there in the thousands.  Entrance is free, from around 9 to 5 every day, and tourists arrive in groups, large and small, or privately in a taxi, as we did.  Apart from its natural beauty spots, half of the most important tourist sites in Thailand are palaces and temples, or Wats. Some of the beautiful palaces have Wats attached to them, and some of the Wats look like beautiful palaces. So much so that a friend warned me, it’s easy to have your fill and get wat-ed out. So I was reluctant to make a detour to see another temple, but we heard so much about it that we decided to go.

The entrance to the temple over a small bridge

To begin with, the parking lot itself was dauntingly huge for such a small village so close to the Thai-Myanmar border. There were large groups of mostly Chinese and Thai tourists at the temple; smaller groups from a smattering of nearby Asian countries and a few Europeans. Picking up a free brochure available in several languages, one learns that the temple is a work in progress begun 16 years ago, that it was conceived and built by Ajarn Chalermchai Kositpipat, an artist who was born in Chiang Rai. “I want to be good and valuable to my country. I want to create arts in my own style and to develop Thai Buddhist arts to be developed internationally. I want people of all nations to come and admire my works, like when they want to visit the Taj Mahal or Angkor Wat.”

The art and architecture of the temple certainly is distinctly Thai. One sees shapes reminiscent of mudras made by the flowing hand movements of a Thai dancer. Chalermchai says he takes themes from ancient Thai murals, trying to create a modern synthesis that is recognizably and uniquely Thai. If the number of visitors is taken as a measure, then his ambition has certainly been realized. Within the temple are modern murals that face a statue of the Lord Buddha. “I want people to feel peace and happiness and to envision the kindness of the Lord Buddha to all beings,” says Chalermchai. “The mural shows the final conflict of the Lord Buddha’s own demon before he received enlightenment and freedom from immoral thoughts.” When asked about the images of George Bush and bin Laden in the demon’s eyes, the artist replies. “I want everyone to know that our world is being destroyed by those who crave to build weapons that kill. They segregate and therefore cannot find peace….”

Chalermchai expects to complete the temple in 90 years.He begins each day at 2 a.m. with an hour of meditation, then creates and sculpts. An artist whose wealth stems from the roughly 200 artworks he produced every year, he now devotes most of his time to the completion of the temple and currently produces around ten paintings a year. The entire site is kept spotlessly clean and supervised by zealous volunteers who ensure that tourists are modestly attired before they enter the temple. The toilets are guarded by a bronze hermaphrodite keeper. 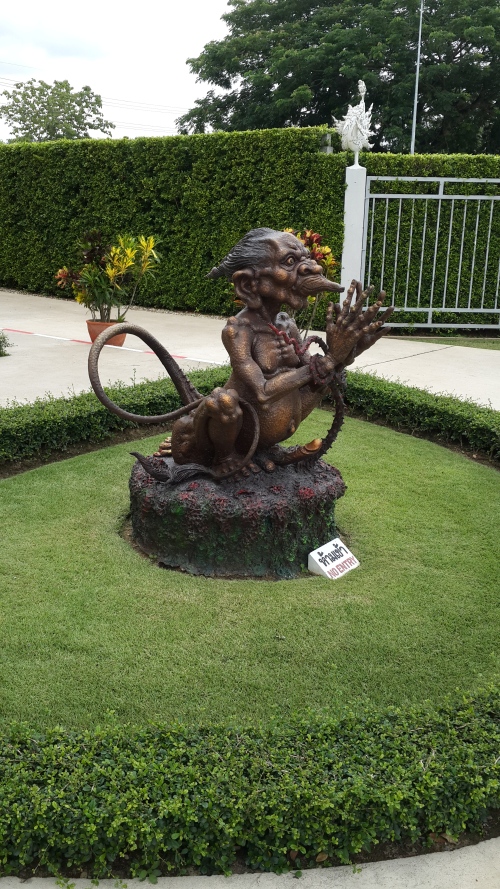 The bronze hermaphrodite custodian of the toilet, front…

Concluding with the artist’s own words: “I want to discipline the mind to train me toward being a good person with clear thinking, speaking well and doing good deeds. We are all human and I want to give goodness to people. If we have love and forgiveness in our hearts, it will come out naturally. You need to practice patience before you can control your own mind.”

…I want to give goodness to people.

By aviottjohn in culture, philosophy, religion, travel, Uncategorized on June 5, 2016.
← Living in Limbo – Streetside Portrait The Flood – after the vote on Brexit →