Three Score Years and Ten: Planetary health and your lifetime.

A quotation from the Psalms recently came to mind. The days of our years are threescore years and ten; and if by reason of strength they be fourscore years, yet is their strength labour and sorrow; for it is soon cut off and we fly away. (Psalm 90, v. 10).

Having reached that Biblical milestone earlier this year, I recall a favourite uncle of mine quoting the above lines at me some decades ago when he reached the age of 70. At that time, his attitude was: I’ve done my bit for the world, and given you a good start. Now it’s up to your generation to carry on the good work. Study hard, find jobs, work hard, and you’ll end up like me, looking back on a life well-lived and enjoying the fruits of prosperity.

Based on the foundations laid by an earlier generation, many in this generation (myself included) worked hard and enjoyed a prosperous life, largely managing to evade the conflicts and other terrible things that happened around the world at different places and different times. We lived in a time of a rising tide lifts all boats otherwise known as trickle-down economics, but somehow gravity didn’t do what it was supposed to do, for the simple reason that human greed defies gravity. So instead of trickling down, money trickled up, slowly at first, until the present day when it’s become a roaring flood. Economic pundits (and most famously the pop group Abba) call it “The Winner Takes it All” syndrome.  Economist Brian Arthur who has published a body of work on technology and society calls it “the network effect locking markets in to the domination of a single player.” 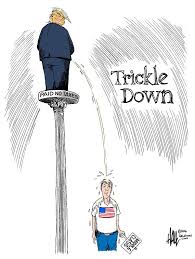 So here I am, at three score years and ten years thinking, the work’s not done yet; we’ve not laid the foundations of prosperity for coming generations, we’re not leaving behind a healthy planet for them. There’s still time, but there’s a lot of work to do, easily doable despite the shortening window of opportunity remaining, if enough people join in. Here are some links to steps for a healthier planet.

These are only small actions, but following the suggested prescriptions on only one of these links can greatly improve your own health as well as that of the planet. As a side benefit you might find, like Moses, that your eyes are not dimmed, nor your natural force abated. So here’s wishing you all the best for the future of the planet.