Home » history » A lake palace, and a lake of tears

A lake palace, and a lake of tears

Udaipur is one of the must-see cities of Rajasthan, for its iconic Lake Palace situated in the middle of Lake Pichola with its grand series of stone and marble palaces that have been successively added along the shores over centuries. Udaipur’s royals belong to the longest unbroken line of rulers in the world, having endured for more than a millennium.

One of the world’s longest ruling dynasties, 1400 years

The present-day city was founded in the 1530s at around 1000 feet above sea level, close to the cooling influence of the Aravalli range of hills. The aboriginal hill tribes of the Aravallis, the Bhils, were traditionally self-sufficient hunter-gatherers and good archers. Bhil tribesmen assisted Rajput troops in their periodic wars against Mughal armies, and for this reason, the Mewar coat-of-arms portrays both a tribal armed with bow and arrows and a Rajput warrior flanking the shield with a fortress in the middle. 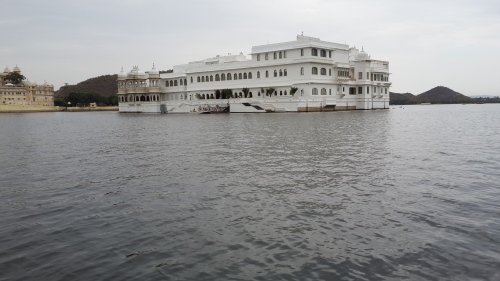 A wedding cake of a hotel on Lake Pichola

The lake dries out occasionally when there is a succession of bad monsoons, but a project is underway to ensure a steady inflow and expand the rainwater harvesting systems that were installed in the palaces from the 17th century onwards.

Nowadays the royal barge is only for decor or the occasional VIP hotel guest. 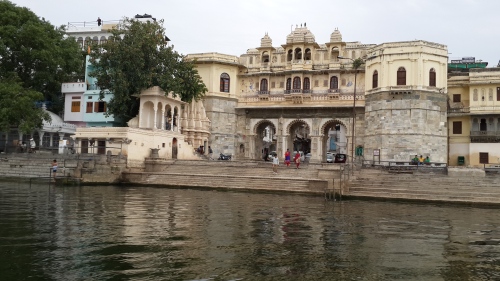 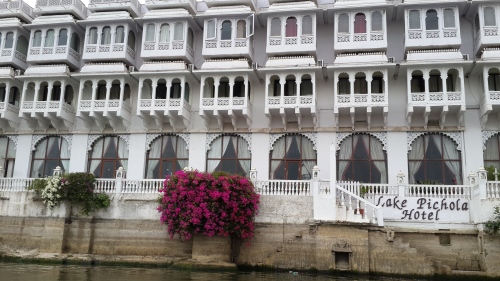 Pushkar: a holy lake of tears.

Pushkar is one of the holy places for Hindus in India. There is a temple to Brahma in Pushkar, a rarity. There are only six temples dedicated to Brahma worldwide and this is considered the most important. There are several beautiful stories associated with the reasons for Pushkar’s sanctity. One has it that Siva’s wife Sati was insulted by her father (this is a long story in itself, see the URL below for more) and literally burned with shame. Siva was so overcome on hearing of the death of his wife that he wept inconsolably. The pools formed by the tears from his two eyes are the lake at Pushkar and the Katasraj temple lake about 300 kilometers away that lies today in Pakistan’s Punjab province.

There is another story about the reason for Pushkar’s spiritual significance. In this, Brahma saw a demon named Vajranabha killing people, so he killed the demon with a divine lotus flower. In this process, the petals of the lotus flower fell to the earth and formed the lake. Yet another story tells of a mortal, a Rajput king, following a wild boar down to the lake during a hunt. He stopped to quench his thirst and found that dipping his hand in the lake had cured his leukoderma. Whatever the reasons for its perceived sanctity, the town exudes a certain contradictory bustling calm and the lake itself is surrounded by temples and bathing ghats. The biggest attraction for tourists is the annual 5-day camel fair where livestock are bought and sold.
See the stories of Siva and Sati at http://www.swami-krishnananda.org/bhagavata/bhagavata_4.html 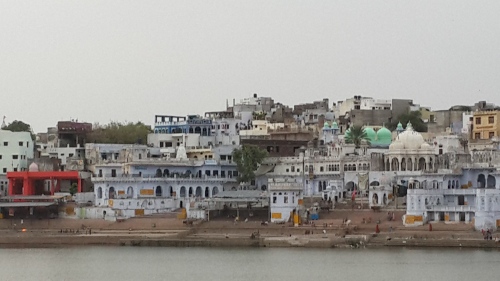 …this is holy ground 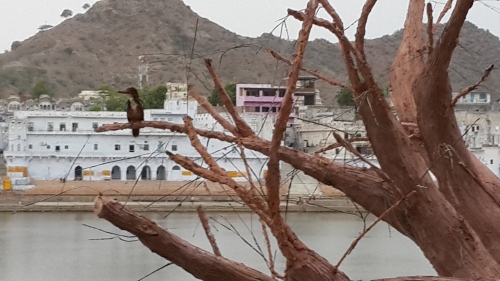 By aviottjohn in history, travel, Uncategorized on September 15, 2014.
← Blue City: britches, brahmins and battlements Facebook for the Gods: Phads and Puppets →