Our tour guide showed us around the impressive Mehrangarh fort and indicated the blue-washed houses in the valley below. All those blue houses, he said, belong to Brahmin families. Further enquiry found many other explanations for the blue coloring, so the jury is out on this one. Other possible reasons: as in the case of imperial yellow in Austrian Habsburg palaces, the color could have been chosen because it was the least expensive. Whatever the real reason, Jodhpur is commonly described as the “blue city” of Rajasthan and, together with Jaisalmer and Jaipur, make up a trio of colored cites in the state. Jaisalmer really is a golden city; golden sands of the Thar desert that spread from its outskirts and the golden sandstone of which the city is built. Seen from the fort, the city of Jodhpur is speckled with blue, the afore-mentioned allegedly brahmin houses. Jaipur is called the pink city mainly because of the iconic Hava Mahal, and because its royal family preferred the colour on all their buildings. But in today’s Jaipur, bustling with handicrafts and industry and bursting at the seams with people, the pink color is lost unless one wanders among the historic buildings and older parts of the city. 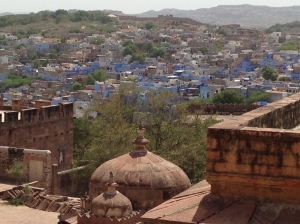 Mehrangarh fort in Jodhpur is probably the most impressive in Rajasthan and well worth a visit of 2 or 3 hours (there’s more than three hours worth to see if you can take it in at a stretch), from royal palanquins to a beautiful collection of swords, and finery worn by royalty in centuries past. A tip: the audio guides available in the fort are excellent and provide concise commentary at every important object on display. In addition to its blue-painted houses, the dominating fort, and riding breeches named after the city, Jodhpur was also famed for its Marwari horses. They are a hardy breed with distinctive ears that point towards each other. They have a regal gait and are descended from local ponies interbred with Arabian and Mongolian horses beginning in the 12th century.Close to Jodhpur lies Mihir Garh, a boutique hotel with only 9 rooms that Lonely Planet listed in 2014 as the most unique hotel in the world.

A well-paved road leads from Jodhpur to Udaipur, again a city named after its founder Udai Singh in the 1530s, although this dynasty has ruled in the area for more than a thousand years, and represents the world’s longest unbroken ruling line, from the 9th century to the mid-twentieth. More on Udaipur and Pushkar in the next post.

By aviottjohn in history, travel, Uncategorized on September 15, 2014.
← Golden City: More bhang for the buck A lake palace, and a lake of tears →