On Wrestlers and Faceless Women

I saw a Hindi movie called Daangal a few days ago. A true story of amateur wrestler Mahavir Singh Phogat in Haryana who raised six girls (four daughters and two nieces whom he adopted on the death of his brother) to be world-class wrestlers who have won many international championships. From a social standpoint, the most remarkable thing is that Haryana is the state with among the worst male/female sex ratios in the country (in 2011, 877 females for every 1000 males). This negative sex ratio is a reliable indicator of low status of women in a society. One can only imagine the real-life battles the Phogat girls faced, in overcoming traditional rural prejudices, cutting their hair, uncovering their faces, competing in early tournaments with boys, finally winning respect by beating many of their male peers and winning championships.

Even though some of the details in the film are untrue, or exaggerated for dramatic effect, there is no disputing that the greatest victory of these young women may not be counted in medals won in the wrestling arena, but in society as a whole. Changes in a society happen in a thousand unexpected ways. Their victories on the floor of the wrestling arena may be reflected in unrelated events in a community. One such example appeared as a feature recently in a Sunday newspaper. In this story, Mahima Jain tells of three women fighting the ghunghat (face veil) in Haryana’s patriarchal stronghold of Faridabad. They wish to show no disrespect to their elders, but also wish to be free of the restriction imposed by the veil. One of them is an educated woman who works in the city with head uncovered all day and sees no reason to cover her face as soon as she returns to her village home.

This news story shows that gender discrimination does not stop with rural, uneducated women, but also affects intelligent, articulate women with advanced educational degrees. As Hans Rosling powerfully shows through statistics in the video posted on this blog earlier in January (Reading the Tea Leaves: a primer for 2017), true development happens in a nation when gender discrimination has been largely overcome. By this definition, there are very few truly developed nations in the world; merely rich ones, poor ones and increasingly, widening gaps within societies between rich and poor.

One amusing and unexpected similarity between the real-life female wrestlers and their film counterparts: the professional wrestlers look just as elegant and sophisticated as the actors who play them in the movie. Check out the photos below without reading the captions first and see if you can tell who’s who. 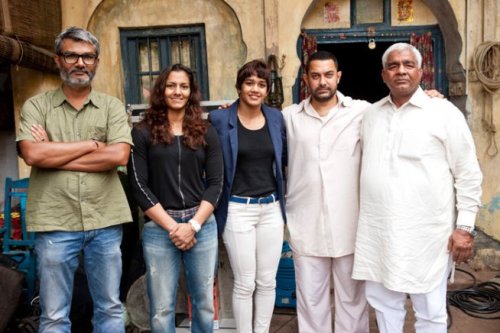 publicity photo from the film 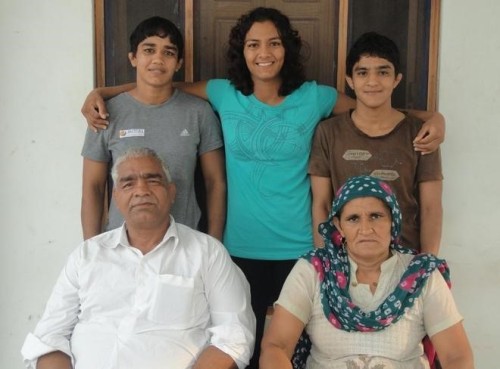 3 of the 6 girls with their parents. Image courtesy thebetterindia

By aviottjohn in culture, development, education, Fiction, politics, religion on January 14, 2017.
← Fossil Fuels are for Dinosaurs II Blades of Grass →